Help the Defence Archaeology Group to feel the love...

The Defence Archaeology Group / Operation Nightingale was founded in 2012 to utilise both the technical and social aspects of field archaeology in the recovery and skill development of soldiers injured in the conflict in Afghanistan.

There is a close correlation between the skills required by the modern soldier and those of the professional archaeologist. These skills include surveying, geophysics (for ordnance recovery or revealing cultural heritage sites), scrutiny of the ground (for improvised explosive devices or artefacts), site and team management, mapping, navigation and the physical ability to cope with hard manual work in often inclement weather conditions.

You can read more about Op Nightingale at the Defence Archaeology Group by clicking here.

It is perhaps not widely appreciated that the founding fathers of much of modern archaeology were senior figures within the British army including Lt-General Pitt Rivers, Brigadier Mortimer Wheeler, Col TE Lawrence, and O.G.S Crawford to name but a few. Meanwhile, many of those who grew the discipline in the post-War world of university expansion and Rescue Archaeology learnt many of their skills in uniform.

With the inherent skills of the infantryman; an appreciation of landscape, topography and deposits in the ground as their lives depend upon it, it is less of a leap of faith to think that archaeology might be a discipline perfect for soldiers.

On this basis, the Defence Archaeology Group derived from a conversation between Richard Osgood, Senior Historic Advisor within the Defence Infrastructure Organisation (DIO) of the Ministry of Defence and Sergeant Diarmaid Walshe of 1st Battalion, The Rifles.

Sergeant Walshe, (who is responsible for the medical care and treatment of the soldiers, including injured personal returned from operations overseas), identified a growing need for some form of occupational therapy and recovery.  As an archaeologist himself he recognised that archaeology had many elements that could help address some of the complex needs of these soldiers and addressing the ailments that they were exhibiting.

Since 2012 many projects have been undertaken both in the UK and overseas – and indeed, excavations at the Waterloo battlefield are being spear-headed by the group this summer

We provide insurance services to the group and contribute to their ‘travel’ fund and we take a very keen interest in all of their activities.

Please show your support by clicking here to view their website and ‘liking’ their various profiles on social media – this way we can help Sergeant Walshe and his team feel the love!

The 1,000th officially recorded archaeological find of the year in Yorkshire is a 2,000-year-old figurine of the Roman god.  It was found by Dave Cooper while he was metal detecting in a field near Selby, and is a remarkable reminder of Roman times.

“It honestly was pure coincidence – but a very happy one,” says Rebecca Griffiths, the Finds Liaison Officer for the Portable Antiquities Scheme at the York Museums Trust.

“Mercury was the god of commerce and so merchants would sprinkle their heads and merchandise with water from Mercury’s well, near the Porta Capena, to appeal to the god for luck in their endeavours.”

The museum is used to receiving items from the public, even when the timing is less curious. The Bedale Hoard, the Escrick Ring and the silver Stillingfleet boar badge of Richard III are already on display thanks to the vigilance of members of the public. 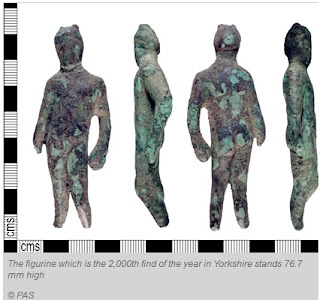 “Every year thousands of archaeological objects are discovered,” says Griffiths. “While the majority of these come from metal-detector users, we also see many finds from people field-walking, gardening, renovating houses and even those out walking particularly inquisitive dogs.

“Due to the quantity and quality of these finds it was realised that, if properly recorded, these discoveries could provide an important source of material with the potential to transform our understanding of the past.

“Each year I, and a small team of volunteers, add more than 2,000 new artefacts to the database. These range from Roman coins to medieval buckles, stone tools to post-medieval toys and pretty much everything in-between.”

The figurine is yet to join a museum collection. 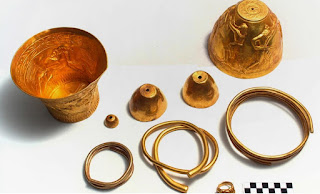 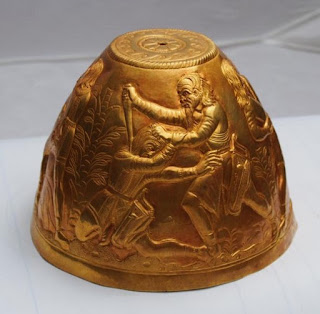