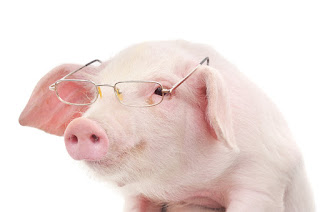 A herd of pig archaeologists have unearthed tools left by hunter-gatherers at Islay around 12,000 years ago.

The stone implements gradually surfaced after years of porcine poking about the shore of the Scottish island, though the official line credits their gamekeeper with the find.

Evidence had previously suggested that the earliest dwelling at Islay dated back 10,500 years, but archaeologists at the site uncovered a level 3,000 years older. This was 'long before any humans should have been in the region' stated one archaeologist, almost as if the incursion of humans on the unspoiled islet had been rude.

As for the pigs, they were originally intended by their gamekeeper to clear bracken on the shore when their intellectual curiosity took over; an archaeologist at the University of Reading - a university in Reading - said that the findings had 'taken our breath away'. Unearthing who 'our' is would require the time and fortitude which only pigs in Islay seem to have, and so you'll have to forgive us for not expanding.

Posted by Export & General Insurance at 11:28 No comments: