Gloucester Cathedral - a political dynasty beneath your feet


The unexpected discovery of an 8ft deep family burial vault in the North Transept of Gloucester Cathedral is a fascinating story for me.

Many of us have trodden over the ledger stones at Gloucester and elsewhere and wondered what is beneath.  As a child, I hoped that there was nothing underneath and that the actual burial was elsewhere – perhaps a way of persuading my 12 year old self that ‘morning chapel’ wasn’t taking place surrounded by dead bodies!

Now, of course, I love the idea of an intricate network of tunnels and rooms under the floor – most yet to be discovered.

From the news reports the family name was Hyett – I can see on the ledger:

And from on of the coffin lids:

Charles’s father is recorded as Benjamin Hyett (1651 to 1711) who I think is our man – so at least one of Benjamin and Elizabeth’s children survived.

Charles was MP for Gloucester between 1722 and 1727 and built Painswick House “to escape the smog of Gloucester” but he died not long after moving there.

Benjamin II inherited Painswick House where he created the now famous Painswick Rococo Garden which was painted by Thomas Robins the Elder in 1748.

Nicholas was a lawyer and Justice of the Peace and one of “the last keepers and constables of the Castle of Gloucester”.

Both Nicholas and Benjamin II failed in their attempts to follow their father’s footsteps into Parliament, but a long line of later descendants were more successful in this endeavour.

Press reports show Richard Clavering Hyett Dickinson (Lord Dickinson) as the living relative – and the grandson of Willoughby Hyett Dickinson, 1st Baron Dickinson of Painswick, who, like his ancestor Charles (and probably many other Hyetts)  was an MP.

Back to the story, I think that I heard in a radio interview the new bishop of Gloucester – the Rt Rev Rachel Treweek- talking about renovations to the Bishop’s Palace and the installation of a new kitchen. Clearly her ‘new broom’ extends to the North Transept renovations and the installation of a lift – which is how this great discovery was made.

It is only by remaining current and fit for purpose in our ever-changing world that our great buildings will survive – and to survive, they need to do what they have always done – change!

My final hope is that the plan is to record the vault by camera and then close it up and leave the Hyetts just as they are.

Posted by Export & General Insurance at 10:02 No comments:

The recent discovery in Jersey of fragments from stone slabs proves that, like us, settlers in the UK were tablet aficionados 14,000 years ago. Plus ça change...

The dig uncovered stone engravings which are similar to those discovered on the continental mainland - which are also dated similarly - but are the first of their kind here and pre-date the earliest discovered art in Britain. 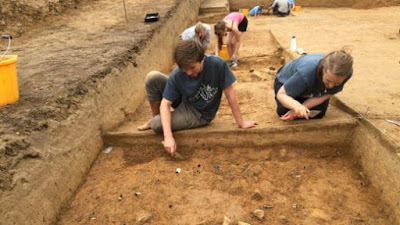 The 'art' in question - for we are using the term a little loosely here - comprises a series of criss-crosses carved into tablets, and are significant in that they perhaps mark the point when our ancestors began to think in a more abstract way.

Unlike at other Magdalenian sites where tablets have been discovered with representations of other horses and animals on them, the carvings consist exclusively of repeated lines, leading experts to surmise whether the artist in question is in fact a distant ancestor of Ed Miliband.

The discoveries were made by archaeologists who have been patiently toiling away at the site - 'Les Varines' - for five consecutive summers. And Dr Conneller, a lecturer at the University of Manchester, is hopeful their labours will bear yet more fruit: 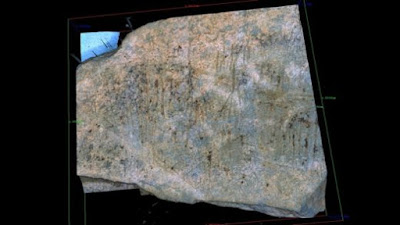 "We're hoping this is a hint of what is to come, because at some other sites you get hundreds of these pieces. What we've got at the moment is only a fragment of something much larger."

A fragment of something much larger indeed:- Dr Silvia Bello of the Natural History Museum is confident that the fragments are the real deal, revealing a shift in hunter-gatherer attitudes from the simplistic to the aesthetic:

"the stones ... show clear incised lines consistent with being made by stone tools, and they do not have any obvious functional role." 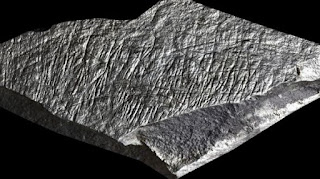 £180,000 has been invested by the Jersey States in the project - dubbed the Ice Age Island Project - and work resumes.

Hat-doff to the BBC for pictures.

Posted by Export & General Insurance at 11:50 No comments: 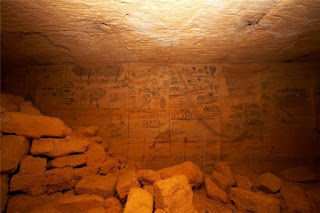 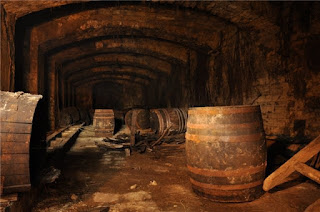