See our entry in the Fair at Current Archaeology Live 2015.  Come and see us at our stall and enter the raffle for some free (and relevant) gifts!

Underinsurance! This is important!

Underinsurance is a very serious business.  If you insure your contents – whether it is your home or your business – for £10,000 instead of its true value of £20,000, you might be forgiven for thinking that in the event of a total loss, insurers will pay you £10,000 – as that is the limit you set on the value.

Let me give you an example.  Mr Charles, a mobile phone shop owner has stock valued at £80,000, but declares to his insurer that he only has stock valued at £40,000.  Mr Charles feels that it is unlikely that all of his stock will be stolen and even if it is, he will take the risk on the additional £40,000 himself.  To Mr Charles, the additional premium required to insure £80,000 of stock just seems unnecessary.  He can use that money to take his boyfriend out for dinner instead.  Now, the insurance company is only aware of £40,000 of stock and after assessing all of the risks to the business and the premises they and deem the security precautions at the shop to be adequate for that level risk.  However, if they had known that there was £80,000 of stock, they would have looked at the risks to the business differently.

Sadly, while Mr Charles and his boyfriend are having dinner at their favourite restaurant, the shop is burgled and £20,000 of stock is stolen.  Mr Charles thinks, “that’s annoying, but OK as I have insurance cover for up to £40,000 of stock– so not problem, we’ll be fine!”

Unfortunately, the insurer feels that they were insuring a risk about which they were not fully informed.  There was £80,000 of stock on-site – not £40,000.  The premium was therefore priced wrongly, the security measures were inadequate, what else might Mr Charles have kept quiet about?  Mr Charles is deemed to have been knowingly (or unknowingly, it doesn’t really matter) underinsured and insurers might pay him £10,000 if he is really lucky but more likely if they follow the rules, NOTHING!

The insurer isn’t doing anything wrong here – it was Mr Charles’ mistake.   His only recourse is to try to use ‘mis-selling’ arguments – which might work (see below), but there is no guarantee – and it certainly won’t be a speedy resolution.

Add to all of this the fact that Mr Charles will probably have his insurance policy cancelled and he will have trouble persuading another insurer to take on his business risks – because any new insurer must be informed of any previous claims AND whether or not insurance has been withdrawn or declined in the past.

This article from the Telegraph online emphasises these points:

THE SIMPLE MISTAKE THAT CAN HALVE INSURANCE PAYOUTS:

A burgled house or a flood can leave victims without possessions or an inhabitable home. However, many of those involved are denied compensation by their home insurer, which may claim that customers have undervalued their possessions on their policy.

The ombudsman said insurers in some cases gave misleading advice to customers when they bought a policy, which led customers to underinsure their home and contents.

Customers are told they are underinsured only when they make a claim, by which time it is too late. In one case, an insurer told a victim of jewellery theft that her policy was void because she had failed to tell them the true value of her possessions. Her jewellery was insured for up to £10,000 under a home contents policy. However, the value of the jewellery stolen was closer to £100,000.

The insurer paid nothing. The victim’s daughter said it had never occurred to her that claiming less than the jewellery’s value would result in the policy being voided. The ombudsman said she was “not properly warned about the consequences of underinsurance” and ordered the insurer to pay £10,000 plus £200 for the trouble caused.

Another couple bought a £50,000 policy for their possessions. The following winter they arrived home to find that the house had been flooded by a burst pipe. Instead of letting the couple claim the maximum amount under their policy, the insurer said it would pay only half.

The insurer’s excuse: underinsurance. It said the couple had not disclosed the full value of their contents so it was entitled to make a lower payment.

The couple said this was outrageous, and the ombudsman agreed. The insurer was ordered to pay £50,000 plus £300 for the distress caused.

A family affected by winter flooding were told their insurer would cover only half of the cost of damage to their six-bedroom house because they were underinsured.

This was after the family had used the insurer’s own valuation calculator when they renewed the policy. However, after the disaster, the loss adjuster said her property had been substantially underinsured.

Peter Cullum and Andy Homer's hopes of reacquiring Towergate look set to be dashed as the broker seeks to bring an end to a lengthy sale process. Cullum and Homer, the founder and former CEO of the broker respectively, are known to have been exploring a bid for the embattled business, however, sources have told Post the duo are now considered rank outsiders as talks continue with US private equity businesses and global broking giant Marsh…

For staff and customers, the roller-coaster trundles along with all of the associated uncertainty.  Becoming part of global broker, Marsh, is probably the most positive outcome, but that will certainly entail UK redundancies as Marsh already has extensive UK operations.

Watch this space as the story unfolds – it seems to be coming to a head pretty swiftly now after months of seemingly rudderless drifting. 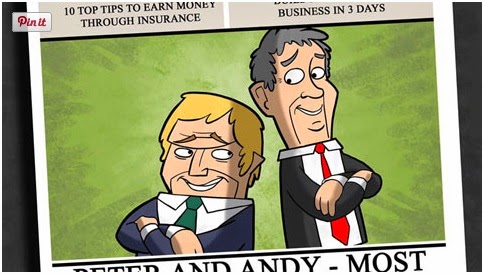 Here is an amusing little story here about Towergate and the original retirement of founders Cullum and Homer in 2011 – and a short cartoon. Shame the film seems to have been viewed once and the lost!  Still the picture (left) is a pretty fair representation of the good Mr Cullum and the equally good Mr Homer!

To quote from ChrisPrice, “…Troubled insurance broker Towergate is considering a £1 takeover bid from its bondholders which will pay off £715 million of the company’s debt.

The firm, founded by entrepreneur Peter Cullum in 1997, was put up for sale last year after announcing falling profits and a debt burden close to £1 billion……”

All seems to have gone so well for so long, but maybe the good times were built on sand?  Well, certainly debt!  “….a debt burden of nearly £1 billion…”  WOW!  That is huge.  I am sure that they will find a way to ‘trade on’ – but surely price increases are the least that existing clients can expect?  Worrying times for the 4,000 or so staff I imagine.  Not sure how well I’d be able to concentrate with this lot hanging over my head.

Crikey!  A story worth keeping an eye on if you have a policy with them.