Attitudes Surrounding the Destruction of Palymra 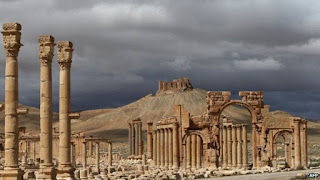 E&G's Dr John Mitchell holds many opinions that are inappropriate for his day and age. He doesn't care for national treasure Steven Fry, could pass on David Attenborough (the other one was better, he avers with a sniff), sees no charm at all in foxes and regards them as vermin; perhaps most extreme of all, he is politically moderate.

So it was characteristic of him that - while I treated the news of the Ancient Roman/Syrian site of Palmyra with righteous indignation and disappointment - Dr John appeared not quite so distraught, saying that the fact everything was digitally recorded beforehand softened the blow.

Interpreting his position for flippancy, I laid into him with all the salivating relish of one of his bloodhounds:

How do you justify your indifference to other archaeologists? How does digital mapping compensate for the erasure of thousands of years of history? When are you paying me?

He answered that he can justify his position quite easily; that the archaeological profession is rooted in the paradox that to create history you must also destroy it (it would therefore be disingenuous not to take solace in the fact that there is a digital record); and not before I've purchased Employee Non-Payment insurance - a new package that he'd kindly tailor to my needs - and subsequently claim on it.

Much as I hate to admit it, what he said made rather a lot of sense. I had never thought that way about archaeologists: I had been led to believe that creation, rather than destruction, was the order of the day. But now that Dr John mentions it, is the position of archaeologists regarding Palmyra entirely honest?

I know nothing at all about archaeology, but if I imagine myself in their shoes I think the one thing I'd learn is that nothing lasts. Creating history would be exhilarating, yes, but wouldn't the prevailing lesson be that of impermanence? In the digital age, we have the ability to upload things into the great cloud; we can immortalise things in the data that we record. It is far harder to destroy this data than duplicate it; logically, it is more reasonable to expect to preserve things as data in the cloud than to expect them to weather physical threats on the ground.

Dr John is not ambivalent about Palmyra, but is right to find salvation in the digital age. Digital mapping may be less authentic than the real deal - but archaeologists deal in destruction as well as creation - and it would be dishonest not to bear this in mind.
Posted by Export & General Insurance at 11:14