The Tale of a Converted Victorian Swimming Baths 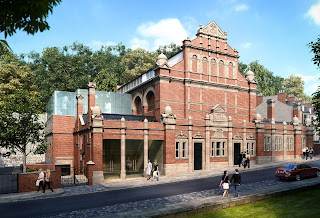 As a doctor of Archaeology, Export & General managing director Dr John Mitchell has a niche interest in the modern craze of “urban archaeology”; but the case of the Bristol Community Dance Centre is one building which he’d rather see preserved.

The Bristol Community Dance Centre is a converted Victorian swimming baths and spa-cum-dance studio; a monument to the fortitude of manager Alan Roberts who has run the premises since the 1980s; and a sentinel part of Bristol’s cultural landscape.

Both the studios and their custodian exude charm: Alan Roberts jokes that the ‘ravages of time’ have left their mark on him; but he isn’t intent on some cosmetic renovations of his own; it is the building that is in need of restoration.

The Bristol Community Dance Centre has been running for almost 30 years, during which time it has hosted performances by Disney, Elbow, Frank Bruno and other stars who regard the Studio One dancefloor as one of the best – if not the best – in Britain. The fact it was built over a former swimming pool makes it ideal for dance: the suspending metal springs beneath mitigate the risk of ankle splint injuries and conduce to more seamless dance manoeuvres. Both it, as well as the performance equipment in the studio, were fitted because of Alan’s tireless campaigning. During his stewardship a total of £1.5m in capital has been raised for fittings and renovations; having showed us the before and after photos of the building, it became clear that his contribution to not only salvaging the building from dilapidation – but also utilising it – has been a staggering feat.

Export & General have insured the studios almost since their inception, and we simply aren’t prepared to see its majesty crumble. It isn’t an exaggeration to say the Dance Centre has played a transformative role in Bristol’s community: Alan relates that a young local gangster - who regretted his life decisions and feared for his life to the extent he rarely went out - was taken to see the annual fandango and was so inspired that he joined the dance troupe, went abroad to dance and left his life of crime behind. This sense of purpose – Alan says – is an example of the magic of dance and drama, made more magic when set inside the soaring red brick walls, arching steel buttresses and vaulted ceilings of a listed Victorian baths. The question, then: isn’t the building owed a transformation of its own? 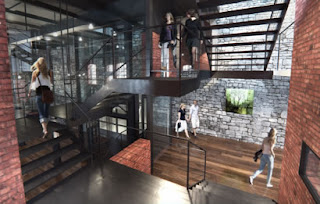 So Alan has spent thousands commissioning an architect to draw mock ups of what a renovated premises would look like. The results are simply stunning.

Plans include a plush new reception, glass veneers throughout the building including a glass balcony encompassing studio one and connecting the building’s 15 levels. The old tank and pump rooms would not only be restored, but given architectural significance: the Victorian bath tank would prop up a glass floor in the café, so you can peer into its fathoms while sipping a latte. A new studio dedicated to flamenco dance would be constructed in the spacious pump room, surrounded by towering steel beams, and would be the only one of its kind in Britain. The charming bathhouse fixtures like the spring valves, which are still connected to the historic 14th century stream built by a Jewish sect running beneath the building, would be restored.

At Export & General we actively embrace innovation and heritage. While the two concepts may seem like uneasy bedfellows, we see Alan’s plans for the Dance Centre as a symbol of our ethos – and their realisation: its total embodiment.

Which is why we really rather like it, and hope it stays around.

Posted by Export & General Insurance at 13:17